Less is More: The Benefit of Smaller Class Sizes

Teachers and classrooms have historically played a pivotal influential role in students’ lives. Not only do they teach curriculum necessary to succeed, but they inadvertently teach daily living, social, emotional, regulatory and behavioral skills that translate to the rest of a child’s life.

Unfortunately, due to a lack of available teachers, the closing of public education institutions due to a lack of funding, population density, and other factors, class sizes have continued to grow, making it incredibly difficult for teachers and students alike to prosper both in and out of the classroom.

Lack of Resources: Is it a Flawed System?

With too many students and not enough teachers, lead professionals end up having to teach the bare minimum in limited ways to a large number of diverse abilities learners as they simply do not have the time to focus on individual learning styles to cultivate success.

A sincere lack of time and resources has led to many students falling victim to a flawed system. The implementation of a national mandatory maximum on the number of students in a class would allow teachers the time to promote good decision-making skills through enhanced working memory, meaningful collaborative learning, and cultivated talents, and reduce risk-taking behavior by limiting classroom anxiety in children and adolescents.

Monash University (2014) notes that smaller classroom sizes (that is, fewer students in a classroom in relation to the number of teachers) in the first four years of education is instrumental in creating successful learners throughout elementary, secondary, and post-secondary education, as well as in the workforce. An enduring and permanent impact at such an early stage in education displays the necessity of making proper changes to allow for future success.

Smaller class sizes, particularly at that age, would allow teachers more time to individualize their education plans to suit the needs of different learning styles and tailor their lessons to focus on important skills in addition to the curriculum. They could devote class time to activities that promote working-memory skills, for example. The Society for Research in Child Development (2015) studied the relationship between working memory and risk-taking behavior, and found that weak working memory is linked to individuals having difficulty controlling impulses and considering the consequences of their actions. These impulses were linked to early sexual behavior as well as unprotected sex, and found that individuals with weaker working memories were more likely to give in to impulses and urges despite long-term negative consequences such as infections and unplanned pregnancy (Society for Research in Child Development, 2015).

If teachers had fewer students in classrooms, this would allow them more time to implement activities that could enhance working-memory skills, thus reducing the potential for risk-taking behavior and difficulties with impulse control. Students would be less likely to engage in potentially dangerous sexual activity and give in to impulsive urges, and more likely to consider negative consequences as a way of avoiding dangerous situations. Actively promoting strong working-memory thus provides preventative intervention for future hazardous behavior.

In addition to working-memory, collaborative learning has also been linked to better decision making (University of Illinois at Urbana-Champaign, 2016). A large group of fifth-grade students participated in a study involving either group discussion or teacher-led discussion that evaluated three aspects of decision making: recognizing more than one option, weighing the advantages and disadvantages of various decisions, and determining multiple arguments to support perspectives (University of Illinois at Urbana-Champaign, 2016). Researchers at the University of Illinois (2016) found that students that participated in group discussion, or collaborative learning, were more likely to succeed in these three areas because placing students in an active role in the discussion allowed them to take an active role in making decisions, rather than passively absorbing information to regurgitate ideas.

If teachers had fewer students in their classrooms, this would allow more time for meaningful group discussion. Frequently with too many students, either not everyone has the chance to participate (which puts them back in a passive listening role), or everyone participates minimally due to time constraints and collaboration is not meaningful.

The additional time created by having fewer students in a classroom would also allow for more individualized teaching which could focus on cultivating students’ individual talents and interests. This might promote healthy hobbies and leisure activities outside of the classroom, and steer students away from violent video games. Dartmouth College (2014) studied the relationship between violent video games that feature anti-social main characters and risk-taking behavior, and found that individuals who spent more time playing them were more likely to engage in reckless driving, be involved in car accidents, be stopped by the police, be willing to drink and drive, and engage in risky sexual behavior.

They note that many studies in the past have evaluated the relationship between violent video games and violence or aggression in players, but have not yet focused on subsequent risk-taking behavior (Dartmouth College, 2014). Given the opportunity, children and adolescents who explore their interests with supervision and guidance may be less likely to choose violent video games as a pass-time, thus reducing the potential for increased risk-taking behavior. They may choose to participate in organized sports, academic clubs, playing musical instruments, and other talents that promote social skills, expand cognitive function, and increase healthy behaviors.

Having fewer students in a classroom allows teachers not only the time to explore these interests with their students, but also to expose them to different activities such as unique sports or instruments that they may not have otherwise encountered, and may find themselves interested in. Smaller class sizes would again reduce the potential for risk-taking behavior and promote thorough decisions. 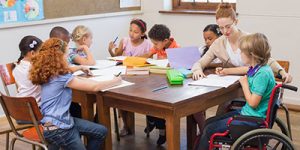 Having too many students in a classroom might also stimulate fear and anxiety in students due to a lack of engagement, feelings of disconnect and isolation, and a lack of meaningful interactions. Anxiety has been shown to disengage the prefrontal cortex, which leads to poor decision making (University of Pittsburgh, 2016). Previous research has focused primarily on the idea that anxiety and fear tends to put both the brain and body into overdrive (for example, stimulating the nervous system and the fight-or-flight response), but the University of Pittsburgh (2016) has found that this is not the case for the prefrontal cortex.

Anxiety tends to limit its processes, and possibly disengage other areas of the brain as well, making decision making much more difficult (University of Pittsburgh, 2016). In larger classes, simply due to the unbalanced ratio of students to teachers, the size of the class itself can promote a student’s fear that they will not receive the attention or focus that they require, that they will fall behind, that others will perform better than them, or that they will not succeed.

With less students in the class, teachers are able to provide both longer and more individualized attention to students, limiting these fears. The California Institute of Technology (2016) also found through functional magnetic resonance imaging technology that the dorsolateral prefrontal cortex is highly active in learning about others’ attitudes towards risk, and that people are more likely to avoid risky behavior if they observe their peers doing so.

If students observe an avoidance of risk-taking behavior in peers, requiring activity in their dorsolateral prefrontal cortex to comprehend, but this activity has been inhibited by anxieties, they may stray from social learning and engage in risky behavior nonetheless. It is possible that the same would apply if students observed risk-taking behavior in their peers but could not learn this behavior and would in turn avoid it. In a classroom, however, small enough to promote decreased risky behavior and increased decision-making skills, students would not observe risk-taking behavior in peers either and this phenomenon would not occur. Smaller class sizes may then promote proper prefrontal cortex functioning, and thus, proper decision making.

Implementing regulations on the number of students each teacher can have in their class would therefore promote healthy decision-making in children by increasing working memory, allowing for meaningful collaborative learning, and personalizing education plans all while decreasing risk-taking behavior by limiting fears and anxieties surrounding school. Allowing students the opportunity to enhance their memories and critical thinking skills in a positive environment will also create both happier and healthier children. This change will translate into their future education and careers as well as their social and emotional wellbeing.

Children that learn to avoid risk-taking behaviors at a young age would be less likely to commit crime, and lower crime rates would have a positive socio economic impact. Students that learn to work collaboratively with others will succeed in multitudes of career and work opportunities where this skill is paramount. Limiting anxieties allows for proper prefrontal cortex function, and therefore decision-making skills, which would not only promote positive thought processes for emotional wellbeing, but also allow for good decisions leading to happier and healthier lives in all. The earlier these changes are made, the sooner children can develop these skills and abilities that will exist not only in their education, but also carry over into the rest of their lives to promote personal growth and happiness for the rest of their lives.

Pivot Point Learning Centres Society has various Community Classrooms throughout the province of BC. For more information or to connect with a Regional Manager in your area, visit: http://learningcentres.pivotpoint.ca/register/

Monash University. (2014, May 1). When it comes to classes, small is better. ScienceDaily.