A Tribute to Melissa Marche 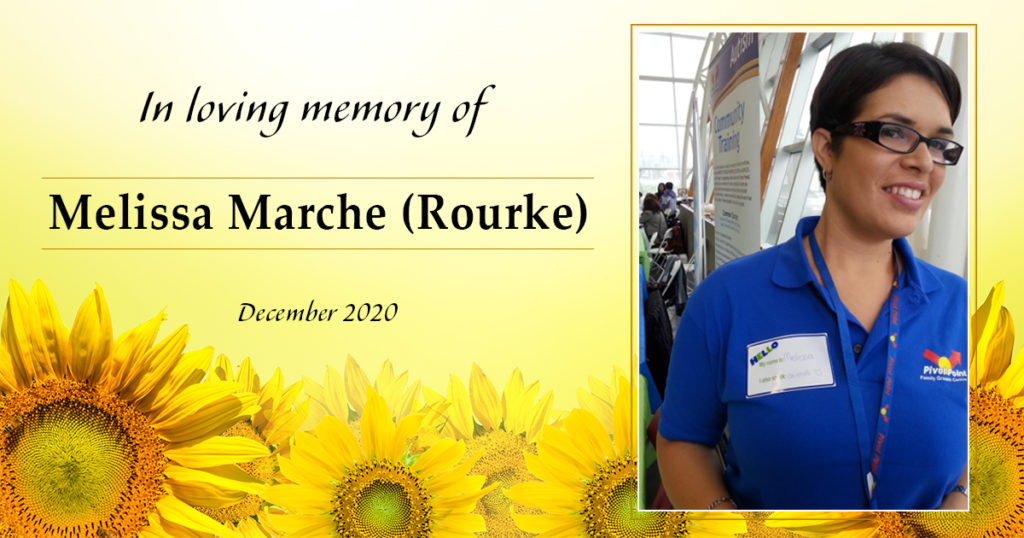 We never expected you to leave so soon.

Although we weep for those of us left behind, this is a Tribute to a woman who wasn’t afraid to do the right thing, and pursued it with her whole heart.

Melissa was out righting wrongs and advocating for those who couldn’t speak for themselves when she was still a child. She told me recently that she would stand in support of every peace-loving-save-the-planet activist movement she possibly could. Her parents, not knowing quite what to make of this amazing child, shook their heads in resignation and continued to teach her the life lessons that, unbeknownst to them, would end up benefiting us all.

She was a champion for so many. It seems incredible the amount of good work she did. It’s like she lived several lifetimes, all in the space of 43 years.

Melissa enjoyed making a difference in people’s lives, which is why in 2011, she sought out Pivot Point and applied to work there. She was looking for people who understood and cared about the same things she did. Her people. She wanted to surround herself with those who were intent on doing the right thing for humanity. Human achievement, human dignity and respect have always been important to her. Melissa actively sought out ways to be part of the solution for those who struggle. Imagine her fearlessness as she drove around by herself, picking up donations from the community, and distributing them to people living on the streets. I’ve heard her say many times that everyone deserves a better life, and it’s not our place to judge. She was incredibly brave, giving and joyful. She didn’t just talk about helping, she did it. Even when she began working full time, she didn’t stop looking for ways to help people. As a single person, she became a foster parent and continued to actively volunteer with social service agencies. She considered it a privilege.

When Melissa first came to Pivot Point, she was already working a full-time job in downtown Vancouver, but working with children and youth on the autism spectrum was her ‘jam’ and it totally jazzed her. Her co-workers at the 9-5 job were shocked to hear she was heading off at the end of another long work day to put in several more hours as a Behaviour Interventionist. As she went out the door, she would jokingly say to them: “Bye, I’m going to do my real job now.”

Melissa and I crossed paths when she joined Pivot Point. I was new to the organization, and asked her how long she’d been working there.

“This is my first staff meeting,” she said.

I was stunned. She was a brand-new employee, and yet here she was, working with two clients considered by all, to be among the most behaviourally challenged in that region! This self-assured woman, who instinctively knew how to teach and empower people, had simply stepped in and stepped up. I remember she laughed at my astonishment that night, and even years later, as our friendship grew, she never forgot that moment.

She didn’t shy away from things that were too hard. In fact, she often chose to do them because they were hard.

Melissa had an awesome sense of humor and loved making an entrance. One notable Christmas party, she showed up at the pub we’d gathered in, looking gorgeous as usual, wearing a full-length ball gown! It was then I got the chance to meet the man of her dreams. I knew this person would have to be someone extremely special, and very patient. My friend Melissa was extra in every sense of the word, and I love her for it.

Melissa’s two beautiful and forthright daughters came into this world in 2014. They were instantly dubbed ‘the bosses’ for this is what she intended them to be in this world. They are wonderful human beings and represent the best of both their parents. They are feisty for all the right reasons, gifted in many ways, incredibly loving and genuine. They are just six, but in time, they will do great things for this world.

But even with all of this accomplishment, Melissa didn’t think she was doing enough. She didn’t ever think herself better than you, because of what she’d learned, done or seen. Her self-confidence came from a pure place, and created an absolute authenticity that shone like the brightest light.

Even so, Melissa was fluent in the language of sarcasm and she was incredibly funny. I can clearly recall the times her words made us both laugh and cry at the same time. She took joy in the moment and she was often curious about life. I adore her smile and am blessed to be her friend.

She never apologized for being outspoken. She often told me that if people are shocked by what she says, then good, at least now we know they’re listening.

Her words were intended to get our attention.

I hope those words are remembered for a long time. She tried hard to make this a better world.

As we think about those words now, and the unique way she said them to each of us, perhaps they will bring a welcome smile amidst all this pain we now feel.
We’ve all learned lessons just by being in her company. Melissa was like that; you couldn’t help learning something, even if you weren’t aware of it at the time. That’s true wisdom.

We will continue to benefit from her passion, and her tireless pursuit of doing what’s right.

And although my heart is sore, I am now fully convinced that this is what it must be like to have befriended an angel.